Home > About > School History > The Legend of Our Lady

The Legend of Our Lady 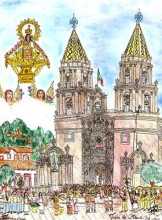 October 7th is considered the birthday of Talpa’s La Chaparrita, The Little Short One, aka Our Lady of the Rosary.

History tells us that Santiago de Talpa was founded in 1599 with Virgin Mary and the apostle James as the patron saints. A humble church was established where the parroquia (parish) chapel now stands and a tiny image of Virgin Mary was placed on the altar with a painting of Saint James, riding a horse, hung to one side.

It is believed that the priest, Sanmartin, who was summoned from Spain and given the task of traveling the countryside to convert the natives to Christianity, was responsible for many of the small, light weight images of earlier times. Credit is given to the Cerda brothers, who lived on the shores of Lake Patzcuaro, for creating their version of Virgin Mary at the priest’s request.

It was decided that the images should be made from natural materials found in the region. There were several plants that could have been used, but it is generally believed that this image of the Virgin was made from finely ground corn stalk heart possibly mixed with the glutinous substance from the orchid. The images were painted with vegetable and plant dyes, polished to a high sheen, and then coated with a lacquer to preserve the colors. Supposedly, the original looked as she does today.

From Patzcuaro, the priest probably passed through Guadalajara, certainly Zapopan, and on to Talpa de Allende with the Tarascan Indian Cerda brothers’ version of the image.

Several years later, Father Sanmartin sent to Spain for a larger version of Virgin Mary, which replaced the little one.

The new one now occupied the main altar and the little one stood to one side on a smaller altar.

The mines in and near Talpa were nearly exhausted, so the conquerors moved on to a place near San Sebastian del Oeste called Los Reyes. They took the priest, the little image and most of the men folks and their families from Talpa and Mascota.

It is not known how he came to have it, whether he bought it from Father Sanmartin or it was a gift from him, but a miner named Diego Felipe kept the Michoacan version in his home for many years in Los Reyes. He and his family set up an altar for her and prayed daily at her feet. As Diego Felipe aged and began to grow infirm, he decided to visit his younger brother who still lived in Talpa. Among other gifts, he brought the Little Virgin to his brother and asked him to build an altar in his home so that he and his family could worship her daily. As that brother grew older, he called in his eldest son, Francisco Miguel, and asked him to be a devoted guardian of the Virgin. Francisco Miguel didn’t believe she would be safe enough in his house, so one evening, without consulting anybody; he slipped into the church and placed her on the altar alongside the larger image and the painting of St. James.

It has always been the custom to celebrate the patrons’ days once a year, and in the early years of Talpa’s life, the days were July 25th and December 8th.

After the exodus from Talpa to Los Reyes, Talpa fell into the parish of Guachinango. Due to travel conditions, the priest visited a few times a year, but not on a regular basis, so the two fiesta days were combined and celebrated sometime in the fall. However, the humble church was well-kept and constantly filled with fresh flowers. Two little bells summoned the natives each afternoon to pray and study the Christian doctrine. The services were organized by stewards, and the cantor’s daughter, Maria Tenanchi, was in charge of cleaning the church, care of the religious articles and changing the floral offerings.

In those days, as today, the custom was for the worshipers to bring fruit and vegetables from their ranches to lay before the Virgin on the altar. Ears of corn, tender tasty squashes, green beans, chilies, cucumbers, and all sort of agricultural products were brought as offerings. These natural products served as a vehicle for a multitude of insects. Time, travel and bugs made holes and cracks in the Virgin. Water from flowers laid at her feet had stained and rotted the figure until it barely had a human shape anymore.

In 1644, the priest came from Guachinango to celebrate the annual fiesta. The church was decorated inside and out with fresh flowers, paper roses, palm fronds and greenery from the forest. The chapel was lighted with grease candles set in clay pots. Beeswax candles were only used for very special occasions. The streets were lighted with rags soaked in pine resin.

While the priest was seated, listening to the choir, he noticed that several of the small images were old and badly disfigured and, according to church laws, should be retired from the public. He stayed on a few days after the fiesta, but before he left, he called in the custodians who were in charge and instructed them to dig a hole in the sacristy of the church, wrap the disfigured images in old altar cloths and bury them. He went on his way to Mascota and other villages before returning to Guachinango.

The hole was dug and September 19, 1644 was set for the burial date; Maria Tenanchi was to be a witness. After she had finished her early morning household chores, taken fresh milk and breakfast to the field workers, she joined a group of her young friends at the church to clean. After she was satisfied with her work, she began to wrap the rotted images in old altar cloths. When she reached out to take the Little Virgin made in Michoacan, it began to light up with such splendor that it seemed as if a bolt of lightening had struck it. This caused such a profound impression on Maria Tenanchi that she fell to the dirt floor in a dead faint.

Her friends, who continued to try to leave the House of God as clean as possible, heard her fall and thought something terrible had happened to her. They ran to help her and asked, “What happened to you? Why did you fall?” She cried out, “Don’t you see that broken down, rotten old Virgin is different now? Throwing out light and surrounded by fire! That’s what made me fall!” Her surprised companions turned to look at the image on the altar and they saw the same change as Maria Tenanchi. They were also knocked to the floor.

There happened to be another girl about fifteen years old standing at the main door of the church who saw what happened to the other five girls. Terrified, she ran to notify the village authorities. Of course, word of this event went out like a dust storm through the village. In a few hours, the church couldn’t hold all the natives who came to see the miracle with their own eyes.

That same night the Talpenses lighted the only two beeswax candles found in the village. Runners were sent to try to chase the priest down and bring him back to Talpa. They were also asked to look for beeswax to make candles for the celebration of such a miracle. They could only find six pounds of wax. On September 22nd the two candles lighted on September 19th had not melted down and they had burned day and night.

The legend tells us there are two things to keep in mind:

There did exist a small decrepit image of Virgin Mary made in Michoacan from cornstalks, and in a few seconds was transformed into another material, heavy as it is today, and in a restored image.

There was no human intervention in this restoration and, if history can be believed, the transformation had to be supernatural, divine or spontaneous combustion mixed with staunch faith.

There is no mention in the legend of the stories we have heard in these parts about her being taken to Mascota and walking back by herself in the middle of the night. There is mention of a terrible plague in this area in 1666 claiming numerous victims every day, especially in Mascota. Folks over there organized a big pilgrimage to Talpa to prostrate at the Virgin’s feet and ask for help. The priest told them to go back home and organize a fiesta for her. The day the pilgrims arrived in Talpa, the death toll began to decline, and on the third day there were no reports of burials. The people were so appreciative, the artisans made a votive lamp of silver for her and asked the priest to allow her to remain a few more days there, but he didn’t permit it and she was returned to Talpa.

Once when she was taken out to visit the sick in La Resurrection, and returned at midnight, the two old church bells began to chime by themselves. Although broken, the bells are still guarded here. One weighs one kilo, 400 grams. The other weighs six kilos, 600 grams.

Our Lady of Talpa School